Wishing you a smiley Christmas from the DentiStar Family..! 😁😁😁 Our clinic will be closed for Christmas holidays on the 24 - 26 of December..!

Happy Christmas to everyone! 🎊🎊🎊

We love making your smile!!!

DentiStar Dental Clinic is with Tasos Toumasis.3 months ago

DentiStar Dental Clinic is with Amelia Angeli.4 months ago

After 2 years and many many many visits to my beloved Dr Tasos Toumasis finally today that he also celebrate his birthdays , we came to an end of part 1 regarding my tooth restoration program 😂😂 Thank you Tasos Toumasis , and your team...

Panicos
After 2 years and many many many visits to my beloved Dr Tasos Toumasis finally today that he also celebrate his birthdays , we came to an end of part 1 regarding my tooth restoration program 😂😂 Thank you Tasos Toumasis , and your team
45 1    View on Facebook

Back together again on the 19th of August!
Ξανά πίσω μαζί στις 19 του Αυγούστου!

For better diagnosis, complete orthodontic and restorative treatment plans we provide our patients with Panoramic, Cephalometric and Intra-Oral X-rays. Check our website for more info!

DentiStar Dental Clinic is with Sergios Xyrichis.11 months ago

Restorative dentistry involves the prevention, diagnosis and treatment of a wide variety of conditions, disorders and diseases affecting the teeth, gums and maxillofacial (associated with the jaw and face) region of the body. It incorporates teeth cleaning, teeth sealants, teeth denervation, teeth extraction as well as prosthodontic services, in case of missing or deficient teeth. In Dentistar clinic we believe in preventive dentistry, offering all the above services in order for you to enjoy exceptional dental health.

Oral hygiene is the practice of keeping your mouth and teeth clean to prevent dental problems, most commonly, dental cavities, gingivitis, periodontal (gum) diseases and bad breath. You can practice good oral hygiene by always brushing your teeth twice a day with a fluoride toothpaste, cleaning between your teeth once a day with floss or another inter-dental cleaner, replacing your toothbrush every three or four months and by eating a balanced diet and limiting between-meal snacks.
Oral health touches every aspect of our lives but is often taken for granted. Your mouth is a window into the health of your body. Whether you are 80 or 8, your oral health is important. Most people today fail to see a dentist each year, even though regular dental examinations and good oral hygiene can prevent most dental disease. Many people believe that they need to see a dentist only if they are in pain or think something is wrong, but regular dental visits can contribute to a lifetime of good oral health. If you are experiencing dental pain, don’t put off seeing a dentist. With dentistry’s many advances, diagnosis and treatment are more sophisticated and comfortable than ever. Don’t forget to schedule regular dental check-ups to keep your smile and yourself healthy.

The term gingivitis refers to the inflammation and the bleeding of the gums. The main symptoms of gingivitis are the swelling of the gums, bad breath, as well as bright red and bleeding gums, especially during brushing. In extreme cases, gums pull back from tooth surface, exposing the root surface of the teeth. In the first stages, the symptoms are milder and do not cause any pain. This is why many patients ignore them, often not seeking treatment before gingivitis progresses to Periodontitis.
Gingivitis often comes from the accumulation of plaque and tartar creation between the teeth and the gums. The microbial plaque, which gathers between the teeth and the gums, produces acids which reach the periodontium thus irritating the gums. Gingivitis, however, is not only caused by neglected oral hygiene, but is also due to hereditary factors, acute traumatic occlusion, pregnancy, hormonal imbalance, smoking, diabetes, blood pressure, intense stress or incorrect prosthetic work (crowns, bridges, fillings).
The focus of treatment is to remove plaque. Therapy is aimed at the reduction of oral bacteria and may take the form of 1-2 visits to a dental professional, along with adequate oral hygiene home care. 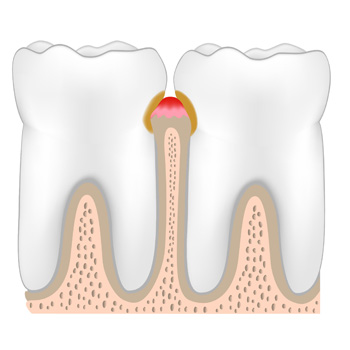 Periodontitis is a disease deriving from the development of gingivitis. It causes infection and inflammation of the gum tissue and of the bones supporting the teeth. This infection is caused when gum inflammations are not treated effectively or not treated at all. The infection and inflammation is spread from the gums to the tissue surrounding the tooth (periodontium) and to the bones supporting it. The lack of support leads to the looseness of teeth and to a certain amount of tooth mobility which will inevitably result in teeth export.

Periodontitis usually develops from a pre-existing gingivitis. Unlike gingivitis however, periodontitis is a not a fully reversible condition. In some situations, the supporting fibers and bone that have been lost can be regenerated. In other cases, particularly in advanced stages of the disease, the effects are permanent. Still, proper oral hygiene at any stage can improve the health of the gums and prevent further destruction.

Periodontitis is a bacterial infection of the gums, caused by plaque. Inheritance also plays a role in its development, as well as other factors that include poor oral hygiene, smoking, stress or hormonal imbalance.

Signs and symptoms of periodontitis can include:

Periodontal treatment stages are summarized in the following: 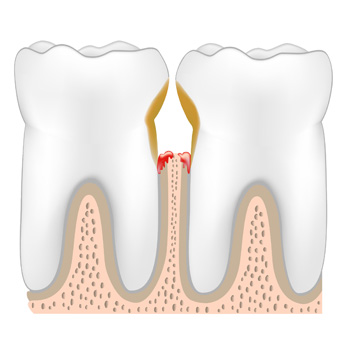 Call us for an appointment

Online Appointment
We use cookies to ensure that we give you the best experience on our website. If you continue to use this site we will assume that you are happy with it.OkPrivacy policy